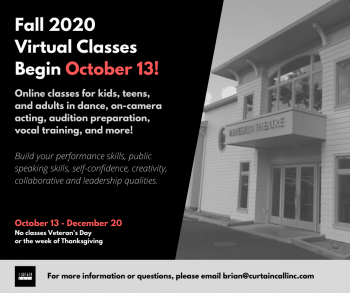 Online classes in theatre arts for kids, teens and adults begin October 13, 2020. ACT NOW TO ACT OUT!
The event has already taken place on this date:
12/17/2020
Time:
Times vary: see our website for details
Learn More

A Haunting at Mill Hill - The Movie

Join GCV&M to celebrate the 100th Anniversary of the 19th Amendment’s passage and women’s constitutional right to vote with our upcoming webinar series “Rightfully Hers: Building the Foundation for Freedom, Suffrage, & Equality.” We will explore the efforts of women throughout history as they laid the foundation for equality and then built upon the previous generations’ struggles and accomplishments to gain rights for women. Campaigns for the right to vote, freedom for enslaved people, and access to education and meaningful careers were sometimes in concert, sometimes in conflict. This series will explore the intersections among these dynamic movements that were – and are now – imperative to all women’s freedom and success.
The event has already taken place on this date:
11/18/2020
Time:
7-8 pm
Learn More